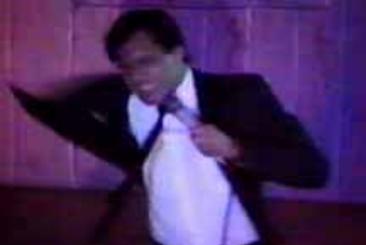 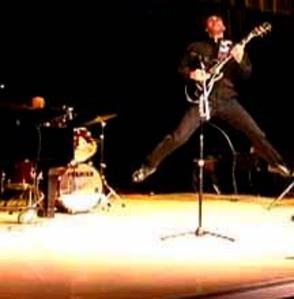 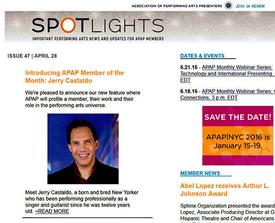 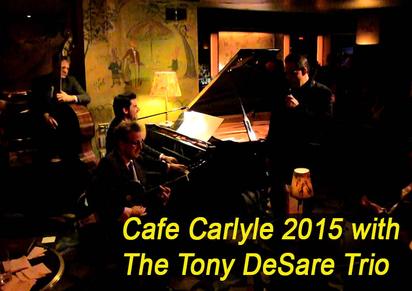 Past Projects and Activity

April 17th, 2015 Interviewed by APAP (Association of Performing Arts Presenters) for their "Artist of the Month" spotlight article. Looking forward to the NYC Convention in January 2016.

12-27-2014 Started having arrangements done for orchestral charts for new show, "Solid Gold Hits of the 50s/60s/70s" and will be promoting this show at the Jan 2016 APAP Convention in NYC.

10-27-2014 Release of Jerry's new music video for his original song, When Did You Stop Loving Me?  Thanks to Emmy Award-winning composer & Drama Desk Award Nominee, Tom Kochan, for his great arrangement. This played on The Howard Stern Show when they interviewed me. Also, thanks to Mariann Brooklyn for playing my girlfriend. The song is now available on iTunes, Amazon and all other online music retailers.

Sept. 9, 2013 Posted video from the benefit game played in with comedian Kevin Meaney, singer Gary US Bonds, 60s recording stars The Cowsills, Claudia Wells from “Back from the Future” and others. Yes, I do fall down a few times, but I was happy with my pitching, hitting and catching! Find it on the "Videos" page and choose Hi Def 1080p on your You Tube settings.

Feb. 2012 Projected release date for a music video of "When Did You Stop Loving Me?" This ballad, written by Jerry Castaldo, features The Howard Stern Show's "Mariann from Brooklyn" who plays Jerry's girlfriend.

Oct. 22, 2012 The Howard Stern Show's "Howard 100 News" department's Jon Leiberman interviewed Jerry about his new music video of his original song ,and played some of the song before and after.

Aug 5, 2012 Shoot date for a music video of the Grammy Award-winning song, "Falling Slowly", from the film/8 time Tony-award winning B'way show "Once". Jerry is on lead vocals and acoustic guitar.

April 7, 2012 Jerry is video interviewed by The Howard Stern Show's "Mariann from Brooklyn" about his book, "Brooklyn NY: A Grim Retrospective".

March 31, 2012 Completed shooting a new music video of the song "Kansas City", spotlighting my lead guitar/lead vocals. View on my FB page and You Tube.

March 3, 2012 Completed shooting three scenes from the film, "The Shawshank Redemption" for Jerry's new acting demo. View on Facebook and You Tube.

Jan 28, 2012 Completed shooting a scene from the Broadway play/feature film, "The Owl and the Pussycat" with actress Ellie Foumbi for Jerry's new acting demo. View on the "Videos" page.

Dec 6, 2011 Jerry aquired a 2,000 sq ft open space studio with 30' high ceilings, which will be used for new video shoots and audio recording. Currently constructing a green screen set, inlcuding a seamless green floor, and a black backdrop set for staging acting scenes for my new reel. High-end lighting/audio will help make this a comfortable workspace to create, without having to be "on the clock" in studio spaces that I've rented in the past. First shoot is scheduled for Jan 28th with B'way actress Cheryl Stern directing some scenes/monologues. Post-production will be done in my home studio.

Oct 5, 2011 Jerry booked and is honored to be speaking in Birmingham, Alabama, Jan 21st of 2012 at a popular writer’s seminar. These invitations are being extended only because Jerry's, “Brooklyn NY: A Grim Retrospective”, is #1 “Top Rated” in several categories on Amazon, and is #4 “Top Rated” out of all 650,000+ non-fiction Kindle books.

Sept 1, 2011 Comedian and former "The Tonight Show" host David Brenner commented on Jerry's new book. His remarks will be on the new back cover of the the book soon. He's also agreed to do a Foreword for the next printing.

May 16th, 2011 - Jerry appeared on former NFL player R-Kal Truluck's radio show, "Inside the Trenches", to promote his new book, "Brooklyn NY: a Grim Retrospective." They then replayed the show for Memoiral Day Weekend (which is unusual because of it's close proximity to the original air date) because R-Kal and casting director Kim Smith both thought that it was one of R-Kal's best shows. He then invited Jerry to fly out to Arizona in the fall to do R-Kal's TV show.

​300+ Shows per year, every year for over three decades!
Jerry Castaldo has maintained a 300+ show per year schedule for over twenty consecutive years!

​From performing with the Tony DeSare Trio at the Carlyle Hotel in NYC, to performing in Europe, Mexico and along the East Coast of the US, Jerry's shows are universally well-received. Please see his "Resume" page for the many name acts that Jerry has opened for, as well as his headlining performances. In addition, Jerry continues to perform at scores of civic, social and fraternal clubs and organizations as well as many political and corporate events. He continues to do it all as a singer, comedian, guitarist and MC/Host, working solo or using his arrangements (by Emmy-Award winning composer Tom Kochan, and Steve Michaels for pickup bands up to 12 peices while on the road.

​
​While not every single performance is listed here, upcoming shows of note that are open to the public will be listed on the "Home" page under "Current Events" and also announced on Facebook.

​Current Projects 2020
Jerry continues to write, record and produce original music at both his home studio and his commercial, 2,000 sq ft studio (see the "Studio" page). His songs are available at the above links to iTunes, Amazon Music and all other online music retailers. They are also streaming on all services such as Spotify and Pandora, too.

​*August Jerry is recording and shooting a music video of, "Summer in the City" by the Lovin' Spoonful that will feature St. Albans, Queens based rapper, Phlaymz.

*Tony nominated Broadway and film composer Gary William Friedman (The Me Nobody Knows) has cleared the way for Jerry to record two of his compositions, “This One’s For Me” and “1945,” for a CD Jerry is slated to start work on late 2016.

He is also busy writing a one-man stage show for the theatre, adapted from his very well-reviewed book "Brooklyn NY: A Grim Retrospective" (see the Buy Book page). Broadway/film/tv actress and director Cheryl Stern is onboard to direct, and the two of them are in the development phase.

Master of Ceremonies and Hosting
Jerry says, “People would be surprised at how many different breakfast, luncheon and dinner events take place daily in New York City for so many different corporate, social, civic and fraternal organizations. I'm often called in to MC/Host and to keep things moving at a snappy pace!"