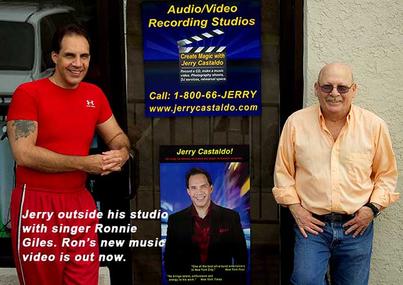 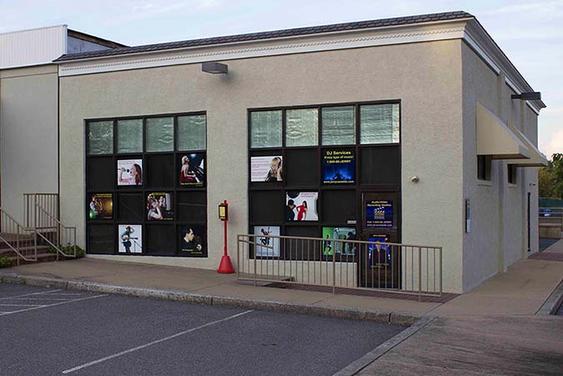 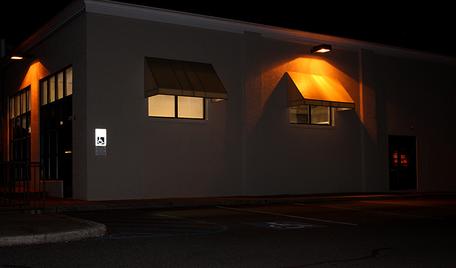 Jerry Castaldo opened this studio for his personal projects in 2011. The Official Grand Opening of this 2,000 sq foot space, now called,  Audio/Video Recording Studios, was opened to the general public in 2013.
​

A lighted Billboard on Route 22 in NJ went up along with twelve 3’ X 3’ photo posters into the buildings front window cubes. This beautiful stucco building has 30’ high ceilings suitable for cameras to achieve creative crane shots. There is also a spacious glassed in lounge area where family and friends can watch the shoots if they like.

​​Jerry's main focus and goal is to allow artists to be creative and to turn out inspiring work that they can be proud of without making price a barrier. It’s often the high cost of recording that stops people from moving forward. Jerry has solved that problem. How?
​
He's made these services very affordable by moving out his hometown of NYC and by opening his facility in scenic western NJ where the overhead is lower. Initially, his move out of Manhattan and his aquisition of this studio in 2011 was so that he could have the creative freedom to produce and release his own projects. After other artists started viewing his videos online, many started asking if they could come out to the studio to realize their dreams of producing pristine presentations of their singing, acting and dancing and curious as to what it would cost.

Back in the early 80s, Jerry was fortunate enough to have Emmy Award-winning composer Tom Kochan, producing him as he transitioned out of Rock n' Roll and into singing The Great American Songbook at top cabarets in NYC like Freddy's Supper Club. Since Tom was on the fast track to success and was often traveling worldwide conducting for the legendary Trini Lopez, Jerry started hiring numerous audio and video companies to make music demos for him and to videotape his live performances. He knew how important it was to have good, strong promotional tools to get his act booked. He also knew that his tapes, CD’s and videos had to be better than the competition that was out there.

The only problem was that these audio and video companies never really seemed to sincerely care about, or to be as excited about, his projects as he was, or as Tom Kochan was when he was available to work with Jerry. Plus, these companies would charge astronomical prices with no room for negotiation on those prices, even though Jerry would plead that he wasn’t a star performer or a huge agency with an unlimited budget.

Jerry decided to take matters into his own hands and started studying audio/video production. He constructed his first audio recording studio using Fostex 8 track analog tape recorders and Fostex 1/2” analog tape mastering recorders to produce his own cassette demo tapes. He got into MIDI production and purchased all the newest outboard processing gear and MIDI synthesizers. He also dove into video production using very expensive Ikagami 3/4” videotape cameras (which were top of the line back then) and learned how to edit. This all helped him in such a big way because even though it was very expensive to make the initial investments, it paid off because his tapes, then CD’s and videos were all able to compete in the pro arena and he was able to get his act booked on a consistent basis.

Fast forward 30 years, and he now has this beautiful production facility.

Even though he initially never started this production facility so that he could produce for others, Jerry came to realize what pure joy it was for him to shoot, edit and then deliver high quality content to pleased clients who are very excited to then have top-rate promotional tools that can use to submit to agents, managers and promoters.  The grateful look on peoples’ faces makes our hearts happy and we also are comforted knowing that they did not have to pay the exorbitant prices that other less caring production houses charge. As you can see, we are passionate about what we do in the studio, both for Jerry's projects and for others.

Again, please check out Jerry's You Tube channel above to see some of our recent video productions. Of course, while we can’t do this work free of charge, We can guarantee you the absolute lowest prices compared to what others charge. I encourage you to shop around and then compare. Remember, this can be just the right kind of high quality promotional tool that can help you get noticed and will also give you the satisfaction of having a killer presentation for the world to see.

Remember, even seven or eight years ago, not everyone had high speed internet access and smartphones, so you’d have to get your videotape or DVD to some busy person who would then have to actually open it, load it and watch it. Now, you can email it, post it on You Tube, Vimeo and Facebook and get instant exposure. A promoter that Jerry didn’t even solicit  actually found Jerry's videos online a couple of years ago and booked him to open for several name acts on the road.

Finally, we can also edit together past footage that’s already been shot and can make it look and sound better using high-end software filters and effects. Current technology is really amazing and we've kept up with the newest  equipment and software regardless of the cost or the time it takes to keep learning, because in the end, the productions are great.

After starting with analog tape based multi-track way back when, then moving to digital tape based (Alesis ADAT) multi-track and SVHS/DAT for mixdown in the early 90s, Jerry is now running three Quad Core, (2 music only) Windows  Pro, 64 bit machines and is working strictly with sample based instruments, triggered via MIDI to prepare music for live shows when live bands are not contracted. An astounding 1,000 gigs of Sample libraries include Garritan Jazz and Big Band, the Native InstrumentsI Kontakt libraries, Dimension Pro and many others are on hand. Drum samples are by Native Instruments, Battery. For guitar processing we have recently introduced Line 6's Helix Native plug in the DAW, as well as having Overlouds guitar plugin and Guitar Rig plugin.

Large diaphragm microphones include the Neumann TLM-103, AKG C414 (2), an Equitek CAD ( as well as several wired and wireless dynamic/condenser handhelds and lavaliers), Mackie mixing consoles and several racks of outboard processing gear round out this well equipped studio.